Bryan and Jason talk about interviews with screenwriter and director Sean Durkin (who directed The Nest starring Jude Law and Carrie Coon), as well as actor James Healy, Jr., review the documentary Zappa, directed by Alex Winter, and discuss Bob Dylan’s sale of his entire song catalog for $300 million. They also preview the upcoming episode with songwriting legend Don McLean, as well as our end-of-the-year recap which launches on December 30. 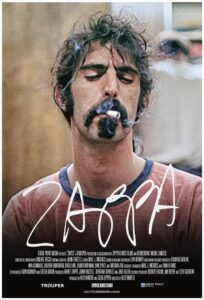