It was a privilege to be interviewed on the Creative Haven Podcast. Mitchel Dumlao and I had an expansive discussion about the challenges facing creatives, and I found our chat about how our reptilian brains create artistic blocks through fear, and the workarounds to break through that fear, to be fascinating. You can check out our talk here.

Check out Bryan’s interview on the “No Rain…No Rainbows” Podcast with Ted Phaeton here.

In this interview, Bryan talks about what he has learned from creatives over the last year on his podcast, including why we are afraid to create and where our creative “blocks” come from. Ted and Bryan also explore what benefits unleashing our creativity can have in our daily lives. Finally, Ted and Bryan discuss what characteristics successful creatives share which help them achieve their full potential as an artist.

Check out Bryan’s interview on the Heal Your Life Podcast with Victoria Johnson, where Bryan talks about why we should not define ourselves by our careers, and how creative outlets can help us find our personal truth. 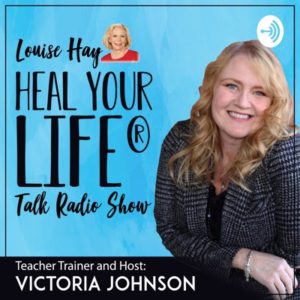 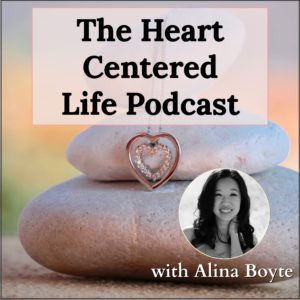 Right as the pandemic was starting to intensify in February, when life was much different than it is today, I sat down with Alina Boyte for an interview on her podcast, Heart Centered Life. It was interesting to be on the other side of an interview for a change. I found Alina to be an engaging, thoughtful host.

Alina’s focus, as the name of her podcast implies, is how to live a heart-centered (as opposed to an intellect- or logic-driven) life. The parallels between her curiosity as a podcast host and mine were not lost on me and I came away from the interview feeling inspired that others are exploring these issues in the podcast arena. Another noteworthy parallel is that, like me, Alina is an attorney. Attorneys are often guided by their intellects as opposed to their hearts, and while this is helpful when analyzing cases and representing clients, it can an impediment to achieving personal fulfillment. No matter what profession we choose, we all have hopes, dreams, and creative goals that our intellects cannot help us achieve. We thus need to listen to our hearts to live a more personally fulfilling life.

Listen to the interview here. 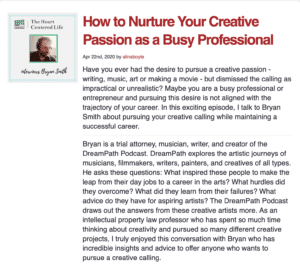 On April 2, 2019, I launched my first podcast interview. My guest was Hiba Jameel, a Seattle-based painter. Hiba is an Iraqi-American refugee who fled war-torn Iraq as a child to start a new life in America with her family. She eventually made her way to the Pacific Northwest where she nurtured and cultivated her love of drawing and painting as a child, eventually turning it into a career. I will forever be indebted to Hiba for agreeing to be my first guest, taking a chance on podcaster with no podcasts. Her episode continues to be the most downloaded episode in the lineup, for good reason.

My second interview was with Rayka Zehtabchi, director of the documentary Period. End of Sentence, which is now streaming on Netflix. I sat down with her right after she won an Academy Award for best documentary short and at the risk of sounding bombastic, her story blew my mind. Twenty-three years old with an Oscar under her belt. How did she learn the craft and art of filmmaking? Why did she choose this subject for her documentary? With poise and eloquence, and without pretense, she answered these questions and more, giving me and my audience the gift of vulnerability and openness and generosity as she shared her story.

Here I am, 42 episodes and one year later, still loving the process, ready for another year (or more), talking to creatives about their artistic journey. To commemorate this milestone, I recorded a short video talking about my journey and expressing gratitude to my listeners as well as to Jason Moore, my editor and producer. 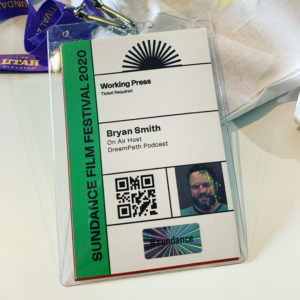 What a privilege it was to be invited to the 2020 Sundance Film Festival as a member of the press. I was able to watch films morning, noon, and night, conduct red carpet interviews, and record multiple long-form podcast interviews with directors, actors, composers, and other behind-the-camera filmmakers. Below are a few of the highlights.

ARTIST AT THE TABLE

My wife and I started the festival at the Artist At The Table event. In attendance were numerous talented filmmakers, including Robert Redford, Ethan Hawke, Lea Thompson, and, sitting at our table, director Joe Berlinger, who directed the 2019 Ted Bundy biopic Extremely Wicked, Shockingly Evil and Vile, starring Zac Efron. In addition to a great dinner, we heard from veteran filmmakers and up-and-coming filmmakers about their journey into the arts, as well as the importance of the Sundance Institute to the independent filmmaking community. 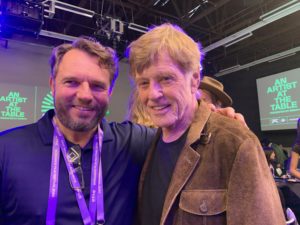 Bryan and Robert Redford at the Artist At The Table event 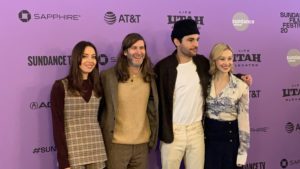 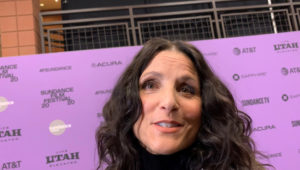 Julia Louis-Dreyfus at the premiere of “Downhill”, answering my question about what it was like to be a producer AND actor in the film. 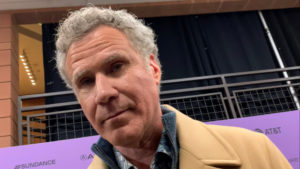 Will Ferrell towering over me as he answers my questions on the red carpet premiere of Downhill. Next time I plan to bring a step-stool. 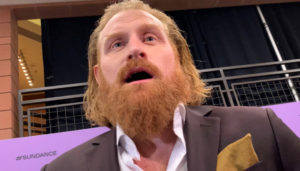 (Wildling) Kristofer Hivju at the premiere of “Downhill”.

Having never attended a red carpet premiere before, it was quite a learning curve for me. How early should I arrive? Where do I stand? What equipment do I bring to capture the audio and video? What questions do I ask of the actors, directors, and producers when I have not yet seen their film? Fortunately the answers to these questions arrived in real time at the event, thanks to helpful publicists on the scene (who handed out “Face Sheets” for the talent available for interviews) , as well as veteran journalists who served as kind, generous, and sage guides throughout the process. 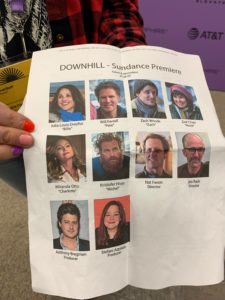 Face Sheet from the movie “Downhill” 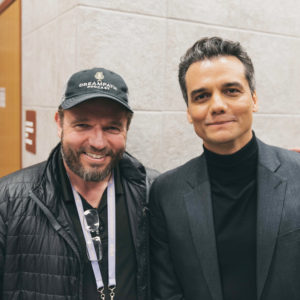 Bryan and Wagner Moura (Pablo!) at the premiere of his film “Sergio”

Going into these premieres, I thought the biggest challenge would be getting actors to talk to someone like me, who is not from a major news network. But I was pleasantly surprised to be wrong on this point. Whether the actors were A-list celebrities (like Will Ferrell, Julia Louis-Dreyfus, Zazie Beetz, Tony Hale) or behind the scenes producers or screenwriters, they were all gracious and generous with their time, answering my questions authentically and from the heart, even as I was holding up my iPhone, recording the interview like a complete amateur. Stay tuned for a separate blog post with video clips of these interviews. 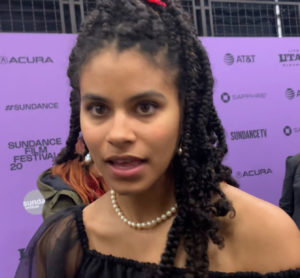 Zazie Beetz at the premiere of Nine Days 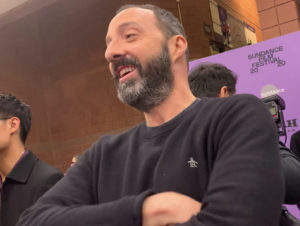 Tony Hale at the premiere of Nine Days

One of the benefits of attending the first half of the festival is the ability to see the world premiere of films in the same theater (sometimes just a few seats away from) as the director, producers, and actors in those films. The actors typically have not seen the film before the premiere, so you are part of a collective experience of seeing the film for the first time. I don’t think I’ll ever get over how special that feels  – that palpable sense of community and family in the crowd, all rooting for and cheering on the filmmakers who worked so hard to make it happen. Another treat at these premieres are the Q&A’s after the film. During these Q&A’s you get a sense of how much hard work and passion went into their film for years before it hit the screen. It really makes you appreciate how difficult it is to get a film project off the ground, across the finish line, and into a festival as prestigious as Sundance. Below are a few photos from the Q&A’s I was lucky enough to see, including Downhill (with Will Ferrell and Julia Louis-Dreyfus), Sergio (with Wagner Moura and Garret Dillahunt), Shirley (with Elizabeth Moss, directed by Josephine Decker, Screenplay Sarah Gubbins), Four Good Days (with Glenn Close, Mila Kunis), Beast Beast (produced by Alec Baldwin, directed by Danny Madden). 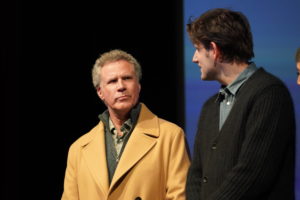 Will Ferrell and Zach Woods 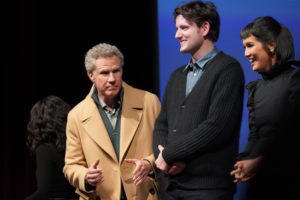 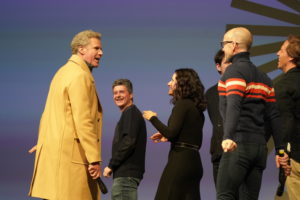 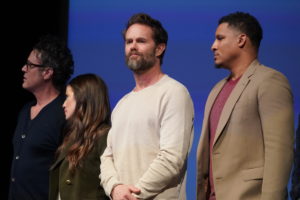 Garret Dillahunt, Will Dalton at the premiere of Sergio 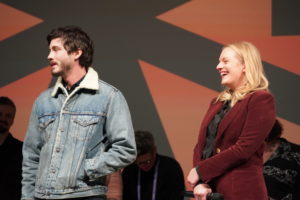 Elizabeth Moss, Logan Lerman at the premiere of Shirley 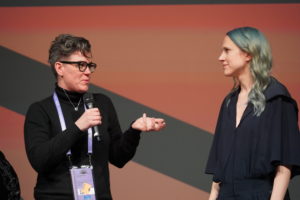 Sarah Gubbins, Josephine Decker at the premiere of Shirley 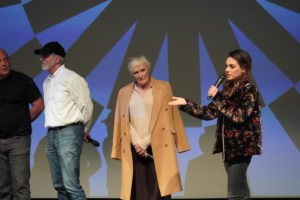 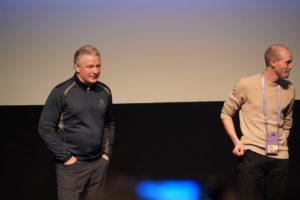 Alec Baldwin, Will Madden at the premiere of Beast Beast 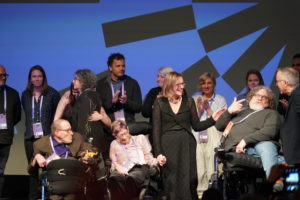 The cast and crew of the incredible documentary “Crip Camp”

Director Julie Taymor and Gloria Steinem at the premiere of “The Glorias” – a biopic on Gloria Steinem starting Julianne Moore, Alicia Vikaner, and Nick Basta

Although I loved Artist at the Table event, the red carpet premieres, and the films themselves, the most special part of the Sundance experience were the long-form interviews I was able to conduct in Park City. I loved the opportunity to talk to filmmakers during the buzz of the festival, in the belly of the best, where deals are made and deals are lost, where some films premiere and are never seen again, and others go on to win Academy awards, all on what many consider to be hollowed ground for independent filmmakers.

The first of the eight long-form interviews I recorded in Park City will launch on Wednesday, February 19 –  one per week for two months. I normally put out two interviews per month, but I’m so excited about this content that I didn’t want to wait four months for listeners to hear it all. There are great photos of the interviews but I”ll wait until those episodes launch to post them. I’m looking forward to hearing your feedback. As always, listens, shares, and reviews on iTunes, Spotify, or wherever you listen to podcasts are greatly appreciated.

Thanks for listening and for your support!