Rob Paulsen is an Emmy Award-winning voice actor, singer, and writer. Notable characters he has voiced throughout his extensive career include Raphael on Teenage Mutant Ninja Turtles, Yakko on Animaniacs, Pinky from Animaniacs and Pinky and the Brain, Carl Wheezer from Jimmy Neutron: Boy Genius, and Spike in The Land Before Time films and television series.

In 2019 Rob, with the help of co-writer Michael Fleeman, published an autobiography Voice Lessons. It details his career as well as his recent battle with throat cancer, and how his diagnosis, treatment, and recovery affected his career and his outlook on life. This year Rob will be appearing in the Steve Martin Spielberg-produced Animaniacs reboot, releasing on Hulu in the Fall. 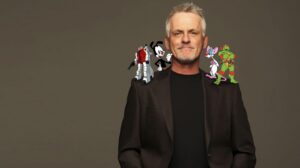 Mental Health Awareness and Pushing Back Against Bullies, with Meredith O Connor