Screenwriter Bettina Gilois, who was interviewed on the show in July of last year, passed away on July 5 at the age of 58. She was an immensely talented screenwriter, as well as a professor of screenwriting at Chapman University. She was also the mother of two brilliant children. As a tribute to Bettina, we are replaying her episode from last July. The show notes from that episode are below: 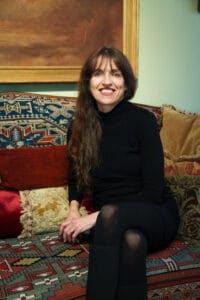 Bettina Gilois is an award-winning screenwriter and author, whose awards and nominations include the Humanitas Prize, the Black Reelz Award, the Movieguide Award, an ESPY Award, and a nomination for an Emmy. After acquiring an art history degree from Columbia University and working at Andy Warhol’s Factory, she began her writing career with Joel Silver and Warner Brothers, and has since collaborated with such notable artists and producers as Jerry Bruckheimer, Michael Mann, William Friedkin, Queen Latifah, James Coburn, Kevin Costner, Christian Bale, and many others.

Her films include Jerry Bruckheimer’s GLORY ROAD for which she was nominated for the Humanitas Prize, MCFARLAND, USA starring Kevin Costner, as well as BESSIE for HBO, starring Queen Latifah, for which Bettina was nominated for an Emmy for Best Screenwriting. Her other produced projects include uncredited work on THE HURRICANE for which Denzel Washington won the Golden Globe, and THE MISTS OF AVALON with Anjelica Huston.

In addition to writing screenplays, Gilois has authored several books, MI VIDA LOCA: THE CRAZY LIFE OF JOHNNY TAPIA and BILLION DOLLAR PAINTER: THE TRIUMPH AND TRAGEDY OF THOMAS KINKADE, both of which are being made into movies. She writes about Arts and Culture for the Huffington Post. Her current active projects include her writing and creating the series MUSCLE SHOALS with Johnny Depp producing at ABC and Nancy Wilson as the music composer.

Artists on The Dreampath: What We’ve Learned so Far, with Bryan Smith