Bryan and Jason discuss takeaways from Bryan’s chat with screenwriter and director Justine Bateman, who made her directorial debut with Violet, starring Olivia Munn, Luke Bracey, and Justin Theroux. Bryan and Jason play a new song (Overcome By You) from Chris Kinkade’s band Elsewaves. Jason talks about some new jazz songs he’s been writing and recording, including a song called Water Visions. And Bryan talks about his upcoming interview with music manager and Gorge Amphitheater founder Ken Kinnear. Ken is featured in the new documentary Enormous: The Gorge Story, along with Pearl Jam, Dave Matthews, and many other iconic artists. 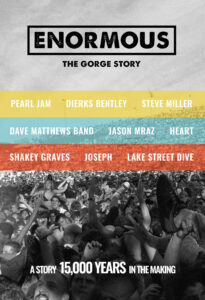