Seattle-based comedian Monica Nevi began stand-up comedy in college and now performs nationally and internationally, headlining at Bumbershoot and opening for talents like Michael Ian Black, Sarah Colonna, Ari Shaffir, and Nick Swardson. She’s also the cohost of the podcast HugLife, host of the 80 for 80 documentary series, host of the Dumb Pitches podcast, and has released two #1 comedy albums. 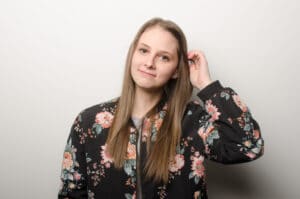