Bryan and Jason recap Bryan’s interviews with Carson Mell, Olivia Taylor Dudley, and Al Di. Carson wrote, directed, and acted in the film Some of Our Stallions, which is now available on VOD. Olivia and Al co-starred in the film (which Al also produced).

Jason talks about his experience watching Some of Our Stallions.

Bryan and Jason also talk about the loss of drumming legend Charlie Watts of the Rolling Stones, and Bryan reviews the HBO series The White Lotus. 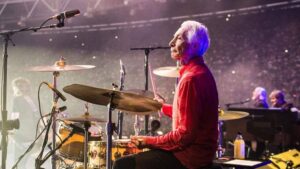 Finally, Bryan talks about his recent interview with film director Amber Sealey, who directed No Man of God, starring Luke Kirby (as Ted Bundy) and Elijah Wood (as FBI agent/criminal profiler Bill Hagmaier). The film dramatizes the relationship that developed between Bundy and Hagmaier during during the last four years of Bundy’s life, before he was executed for murdering numerous women and girls.

Bryan and Jason also talk about the allure of Ted Bundy and why his story has resulted in so many documentaries and narrative films.