Rayka Zehtabchi and Sam Davis are Los Angeles-based filmmakers. Their documentary Period. End of Sentence won an Academy Award for best documentary short in 2019. After their success at the Oscars, Rayka directed and Sam filmed and edited A Woman’s Place which is now streaming on Hulu. A Woman’s Place captures the stories of three chefs, their careers, and their shared experience as women in the culinary industry facing and overcoming institutionalized sexism. 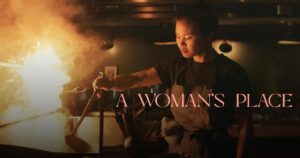